Kanban board will provide a better transparency to your agile process.

I won't try to explain what it is since others has done it before... which you can see here.  The link also provide an excellent e-book on how to integrate Scum and Kanban and a link to their example of a kanban board for those who wants to see the quick details.  You can see it here.

If you are more into the "digital" board, there are other options like Telerik Work Item Manager for TFS, and AgileZen.

Oh, if you haven't heard already, MSF Agile 5 (which ship as a template with TFS 2010) is basically a Scrum based process.  Don't believe it, see this.

Been eating and hawking stuffs related to Application Lifecycle Management lately, especially Microsoft Solution Framework, Visual Studio Team System and Team Foundation Server.  During the workshop that I delivered, I often mentioned certain things that seem to be very useful to know.

Amazingly, they all have 3 sides to them.  I’m sure you all have heard about it somewhere during your career as a developer or what not, but nevertheless, I think I’ll share what I’ve learnt and I’m sure you can benefit from this if you don’t already know them.

1. The Iron Triangle of Time, Scope and Cost 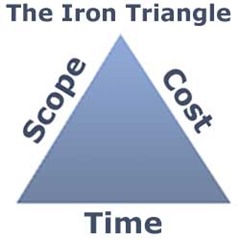 Most development project owner will want to control all three sides of this “Iron Triangle” and they sometime can be unreasonable about it.  It’s your job as the development team to educate / reason with the project owner that in all eventually, they realistically can only control two out of three and will have to sacrifice the third to achieve the other two.

So, if the project owner want all the features implemented and at a fixed monetary cost, they will have to compromise on time needed to complete the project.

If he / she chooses to have the project completed with all the scope specified and within a fixed time (according to their schedule, not what is estimated by the development team), then they will have to pay extra cost (it will be more expensive since you might need to get a more proficient team member or tooling).

One other note on this, adding more human resources in a middle of an ongoing project will NOT help you speed up the delivery time most of the time since the new resources will need to time to get up to date on the current project situation, technology, etc.  There will be some knowledge transfer time incurred when you do this that will impact the deadline.
In most development project, it is often suggested to cut scope in favor of paying additional cost and time (Cost & Time are fixed, since most of the time it will be a fixed cost contract and the client have certain timeframe in mind).

Amazingly, one promise of Scrum (heard from Jeff Sutherland’s InfoQ Root of Scrum presentation) is the ability to break this triangle and basically offer the project owner the ability to “have the cake and eat it too”, so to speak.  Some people argued whether such thing is really possible or not, but I’ll leave it out to you to decide if it’s true or not.

2. The Three Legged Stool of People, Process and Tool 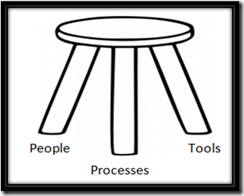 There are a lot of factors in play in software development project which are:

Each of these three can be viewed as the each leg of the three legged stool.  If any one of them is not present, your stool will certainly become unbalanced and will fall down.

As one of my mentors said to me, keep them in your pocket and pull them out when you need them :).  I hope you can use these two three sided tools / knowledge to your advantage and success of your project.

From How Projects Really Work (version 2.0)